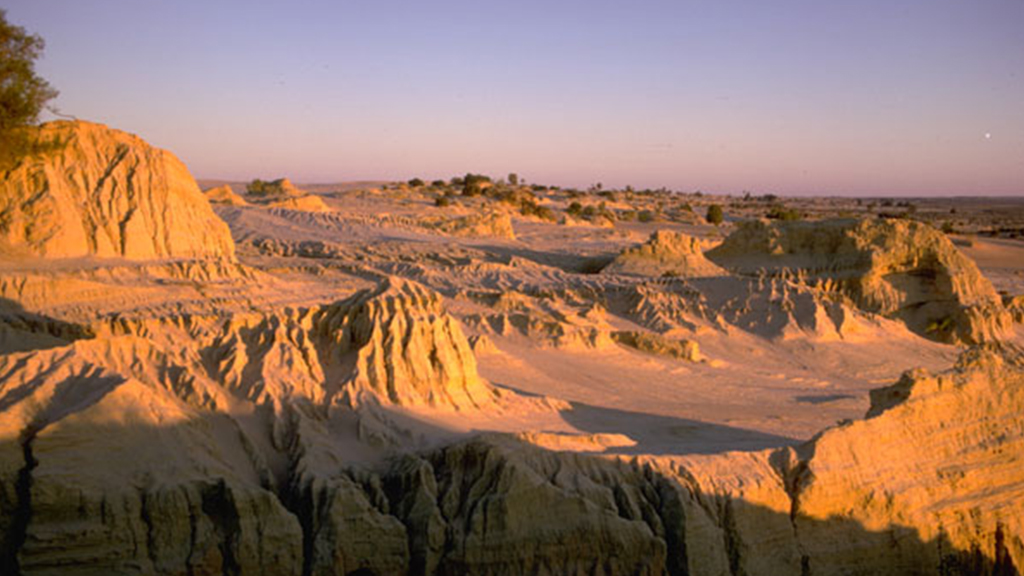 Science has opened a doorway and the ancient remains tell a story of a culture that has survived at least 1,680 generations.

I’ve walked past my father’s organized chaos most of my life. Dad was always surrounded by images from his work in the field, as a scientist specializing in climate change. This time it was different. I stopped and lifted one up. I felt I was sneaking a look at a forbidden world. Expecting to see boring sand and soil or aerial shots of geological sites, I was instead confronted with the most amazing series of slides he had ever taken.

A window to Australia’s ancient past opened – at least forty thousand years stretched between us. I was entranced. These traces of ancient Aboriginal Australia had echoed across the country, causing a revelation over thirty years ago. They had been in my father’s collection all this time, yet I’d never seen them. Captured in sepia-like tones, a human skull lay exposed. A stark white profile etched on the surface of soft sand, so hauntingly real it took my breath away.

As the sequence of slides unfolded and the sand was carefully removed, the extremities of the skeleton revealed themselves, calcified bones still intact. Finally, in a crucifix-shaped excavation, the full skeletal remains of a human being rested, knees slightly bent, hands placed together in the groin. I wondered what Dad must have felt in that moment of discovery.

Mungo Man, as he came to be known, was ritually buried over forty-two thousand years ago in these dunes. Recording this moment – coming face to face with the fossilized remains of someone who had lived in the last ice age – my father wrote, ‘We were confronted, not simply by evidence of human activity but by the very presence of humanity itself.’

This evidence of a sophisticated burial, the body having been anointed in ochre, was the oldest ritual burial found in the world. These findings, along with the discovery some five years earlier of an exposed cranium belonging to a young woman who had been cremated – the oldest known cremation in the world – corroborated the claims made by present-day Aboriginal people that they have occupied this land for an immense period of time. Australian archaeology came into its own. It was 1974.

As a child, when people asked me ‘What does your Dad do?’ I would rattle off an awkward response: ‘He’s a bio-geologist, geomorphologist.’ I had no idea what it meant. We used to joke that he could have a better conversation with a rock than he could with any of his kids.

He was bound by his fate: these discoveries of such cultural and international significance swept Jim Bowler into other-worldly realms. As a scientist, poised at the threshold of an ancient world, questions and challenges arose daily and the mysteries continued to be unearthed at Lake Mungo – he was lost to us kids. I was eight years old. There were always bits of stone flint, rocks, and fossils scattered around our home when I was growing up – hints of the landscape that had captivated him. As a young girl, I was fascinated by the fossils, holding them longingly, wishing I could be a part of his world. I would take them to school for ‘show and tell’ – too shy to say much; they would speak for themselves.

As a scientist, poised at the threshold of an ancient world, questions and challenges arose daily and the mysteries continued to be unearthed at Lake Mungo – he was lost to us kids. I was eight years old. There were always bits of stone flint, rocks, and fossils scattered around our home when I was growing up – hints of the landscape that had captivated him. As a young girl, I was fascinated by the fossils, holding them longingly, wishing I could be a part of his world. I would take them to school for ‘show and tell’ – too shy to say much; they would speak for themselves.

Back in July 1968, while on a routine research trip alone on the eerie dunes at Lake Mungo, events followed that would change my father’s life. While mapping the ancient beaches often littered with stone artifacts, his attention was brought to a ‘portion of strange bone fragments appearing out of the eroding soil on the lunette.’ He later wrote, ‘I found myself walking in the footsteps of people who had lived, loved and died on these same sands many thousands of years ago.’ Archaeologists soon arrived and identified these shattered bones as the cranium of a young woman, the first modern human of such antiquity to be found in Australia.

Originally called Mungo Lady, she had ritually been cremated some forty-two thousand years before, her skull burnt, crushed and placed in a hole in the ground. These fragments, in danger of being eroded by sheep, were removed, packed in the suitcase of eminent archaeologist Professor John Mulvaney and taken to Canberra. The tribal women from the Willandra country, of which Mungo is a part, called her back home. She was returned in a small ceremony thirty-four years later in 1992 to the traditional owners of her land, who are still awaiting funds – more than 20 years later, to build a ‘keeping place’ for the treasured remains of their ancestors.

Mungo is a powerful place: it exposes the painful chasms and invites communion; the spirit is palpable. Even hardened politicians are touched. At the ‘Living Together’ conversation held in Mildura, former deputy prime minister Tim Fischer said of Mungo: ‘It’s cleansing, the static and acid of modern-day living drop away. Being able to be uplifted in a meditative manner in all the forces I don’t necessarily understand come together on the lunette of Lake Mungo.’ The eastern lunette, known as The Walls of China, is formed and changed by the westerly winds blowing, exposing the secrets of antiquity. In other parts of Australia the spirits may indeed have left the land, the grief and loss overwhelming; Mungo defies this and shines like a beacon for many people.

Dad had spent over five years in the late ‘90s sitting on a windy hilltop in his weathered, wooden yurt overlooking the beautiful vista across the valley to Wilsons Promontory. In this secluded place, his hermitage, now in his mid-‘80s he sat reviewing his life’s research at Lake Mungo – drawing graphs, sifting through photos, gathering maps and documenting over 600 images and narrative into a multimedia format. The audience was to be educators and schools – it was published by Melbourne University Press in 2002.

I was blown away, yet again, by the transcendent world, my father occupied. Time stretched beyond anything comprehensible, yet through the disciple of science, in particular, geology, he was able to map it. The past 500 000 years have seen three ice-age cycles with the most recent starting 130 000 years ago. Dad is a climate change scientist after all – who would have thought that this area of study would be so critical today?

A new journey began to find a curriculum writer who could bridge science, history and Indigenous perspectives to help integrate all of this for educators – a big call! The ancient people were on our side, and it was while attending the ‘Mungo Youth Project’ at Lake Mungo that I was given the name of ‘the best person’ for the job. Jacquie Taylor came highly regarded having worked as a consultant for ‘Dare ToLead,’ a principal lead organization with a focus on Indigenous education. More importantly, Jacquie was highly respected by Indigenous educators, quite a few of whom she had mentored in her career as an educator, principal and curriculum writer. She made herself available for this seminal work and commented:

Began exploring the CD. I knew it to be one of the most comprehensive and informative resources that I had viewed throughout a very long career in education. It possesses incredible potential for a curriculum writer/classroom teacher to harness. I recognised the uniqueness of the resource and I believe every Australian student should explore the significance connected with the Lake Mungo discoveries.

‘Mungo Explorer’ was launched in 2013 with teacher reference sheets, study sheets, and lesson plans. From my understanding, until recently most teacher training has not included a detailed exploration of the past 50 000 years, now outlined in the curriculum. In discussions with teachers from different states, many expressed concern about protocols regarding Indigenous history or the lack of resources and knowledge base, choosing instead to steer away from this topic. As a result our students are at risk of missing out on this incredible story, one of tenacity and resilience, and the interconnection with cycles, environmental changes in climate, awareness of sustainability over extraordinary time, and respect for the people who have navigated and been spiritually connected to this country for over 50 000 years. In my Dad’s words, ‘a fascinating history.’

For the students and teachers who have explored this resource, their perceptions are totally changed. Rarely do teachers and students have access to a scientist’s research materials. This dynamic body of work, complemented by the expertise of Jacquie Taylor, provides a multidiscipline curriculum package weaving together science, history, Aboriginal perspectives, geography, and the arts into a transformative learning journey. Consultation and permission by the members of the Willandra World Heritage Elders Council have been given for both Jim Bowler’s work and recently for the Mungo Explorer curriculum.

In July 2019, we re-launched Mungo Explorer having recently uploaded all the curriculum resources onto a user-friendly web-based platform, accessible in any classroom.