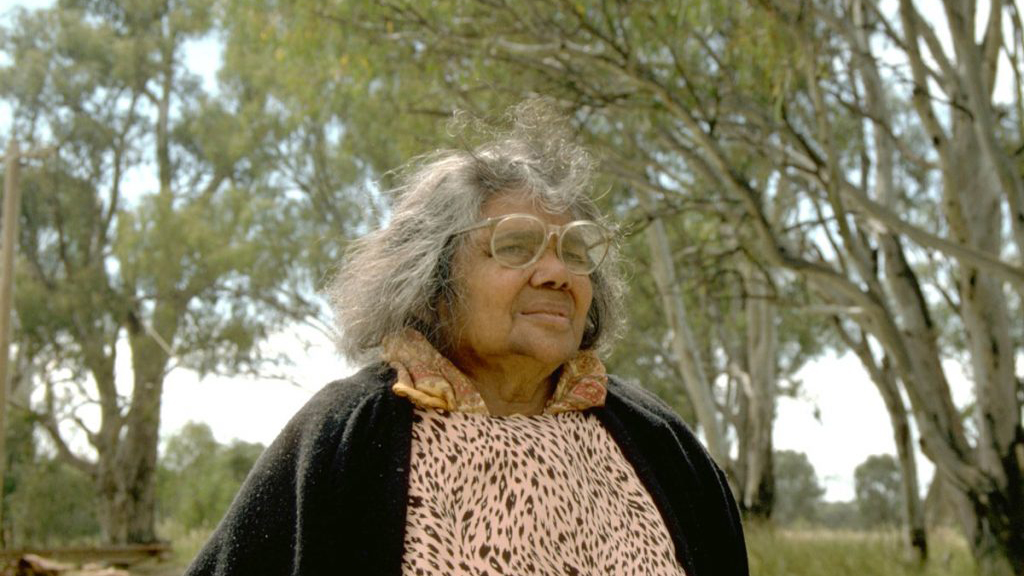 The NAIDOC 2020 theme – Always Was, Always Will Be. – recognises and celebrates that First Nations people have occupied and cared for this continent for over 65,000 years.

At Lake Mungo the story of land and people come together. In this dry land, water is a treasure. In Ice Age times people came to Lake Mungo for water, and especially for its resources such as fish and mussel shells. They came to live by the water’s edge, simply to enjoy life and eventually to bury the dead. The lakeshore sands have preserved stories of those lives.

Those stories help us understand the land, the Ice Age climatic changes that shaped it and, above all, they provide a window into the lives of people living there over 50,000 years ago. Exploration of these stories helps us to understand the descendants, of our Aboriginal sisters and brothers today.

Note: Aboriginal and Torres Strait Islander peoples are advised that Mungo Explorer does contain images and voices of people who have died.

Sediments at Lake Mungo have been deposited over more than 120,000 years. On the eastern side of the Mungo lake bed are the “Walls of China,” a series of crescent-shaped sand dunes or lunettes, up to 40m in height, that stretch for more than 33 km, where most archaeological material has been found. There are three distinct layers of sands and soil forming the Walls. During the last ice age period, the water level in the lake dropped, and it became a salt lake.

This made the soil alkaline, which helped to preserve the remains left behind in the Walls. Although the lake completely dried up several thousand years ago, ground vegetation remained on the Walls, which helped to stabilise them and protect them from erosion.

The Cultural Significance of Mungo Man and Mungo Lady

This timeline demonstrates how ancient and unique the finds at Lake Mungo are to the world community of both anthropology and archaeology. As the earliest discovery of ritualised burials, this makes the discovery, and the area generally of exceptional significance. The Traditional Tribal Groups of the Lake Mungo area are the Paakantji/Barkindji, Nyiampaa and Mutthi Mutthi and they have played a significant role in heritage management and in demonstrating their burial skills to other Aboriginal groups.

Mungo Man, discovered in 1974 by Prof Jim Bowler, was ritualistically buried; his body was placed with considerable care in culturally specific ways. Once the flesh had disappeared, the bones were then covered with ochre and reburied (no one is certain of the cultural practices involved before the ochre was applied to the skeleton).

Ochre is a natural pigment brought in from at least 60 miles away. This is some of the earliest evidence of spirituality anywhere in the world. Mungo Man’s remains turned out to be twice as old as any found anywhere else in Australia, and that fact is the case to this day.

Lake Mungo, and the site around the skeletal remains has become a rich area for archaeological discovery. Masses of tools, animal remains and hearths are everywhere in the same lunettes that the remains were found – suggesting the area supported a thriving community living off wild game, plants and seeds, but mostly fish and shellfish caught in the freshwater lake.

The lunettes demarcate the edge of Lake Mungo in the times when it held water. Also, one of the most culturally significant discovery was that one of Mungo Man’s teeth had been removed – a ritual still practiced today when Aboriginal men enter adulthood. It’s compelling evidence for a cultural connection between modern-day Aboriginal people and their ancestors. An unbroken continuum of some 42,000 years.

We are very privileged to have Prof Jim Bowler’s work together in one platform, Mungo Explorer, for all of us to learn more about this unique site and its cultural and ecological significance. For the Australian Curriculum, Mungo Explorer covers all of the 7 General Capabilities mandatory for schools throughout Australia as described above. Mungo Explorer is the perfect learning tool to, not only understand Australia’s First People culturally but the context of these ancient people historically, environmentally and geologically; crossing the boundaries of the hard sciences with the Humanities and Social Sciences.

And when there, you may be interested in exploring other platforms in the Learning Lands suite of digital products available as a full package.

In Learning Lands, you can follow Joko’s travels in Joko’s World with animated stories, geography puzzles, and Joko’s travels around the world to amazing cultural festivals learn about the oldest ritualised burial ever discovered of Australia’s First People some 42,000 years ago with Mungo Explorer create musical compositions with traditional instruments from around the world with Sound Infusion bring your student’s leadership skills with our Intercultural Citizenship Ambassador Program (ICAP) and map your intercultural community with Diversity Atlas

As educators, your feedback is highly valued in continuing to develop and enhance these programs; ensuring they are relevant, curriculum compliant, and accessible to both teachers and students. We look forward to hearing from you.